Russia has created a reserve of law enforcement officers to help Belarus in case the situation gets “out of control,” according to President Vladimir Putin, who said it was requested by Belarusian leader Alexander Lukashenko, Russia Today reported.

Speaking to Russian TV, Putin explained that he agreed to help Lukashenko, but only in the event of an extreme situation. “Mr Lukashenko has asked me to form a backup law enforcement unit, and I have done so. However, we also agreed that it won’t be used unless the situation gets out of control,” the president said.

This could involve “extremist elements, hiding behind political slogans, [crossing] certain lines,” such as setting fire to cars, houses, and banks, or trying to seize administrative buildings.

“There is no need to use Russian forces in Belarus yet, and I hope there never will be,” Putin said.

Lukashenko is looking eastwards for help after weeks of demonstrations following the country’s disputed elections. According to the official result, incumbent Lukashenko won a barely credible 80 percent of the vote, while opposition candidate Svetlana Tikhanovskaya, now in Lithuania, came second with 10 percent.

Tikhanovskaya’s HQ said exit polls showed her polling up to 80 percent, also a clearly exaggerated figure. Many Belarusian citizens believe that the election was completely falsified, and protesters took to the streets, clashing with police.

The opposition has established a coordination council for the transition of power in the country. The Belarusian Investigative Committee responded by launching criminal proceedings over its creation.

So far, Putin and Lukashenko have discussed the situation in Belarus four times by phone. The Russian leader also discussed the current events in Belarus with French President Emmanuel Macron, German Chancellor Angela Merkel, and President of the European Council Charles Michel.

On August 15, Lukashenko told the Belarusian Ministry of Defense that Russia would provide comprehensive assistance to ensure their security at the first request. Since 1999, the two neighboring countries have been part of an agreement called the Union State, meaning that citizens of both countries have the right to move freely between the two, and can settle without the need for a visa. As part of the Union State, as well as membership in the Eurasian Collective Security Treaty Organization (CSTO), both Russia and Belarus have a requirement to defend each other in case of external threats. 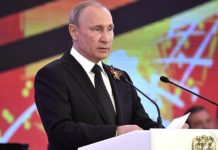 Animepahe: BOFURI: I Don't Want to Get Hurt, so I'll Max Out My Defense. (Dub) anime episode 12 online free at https://animepahe.cc animepahe