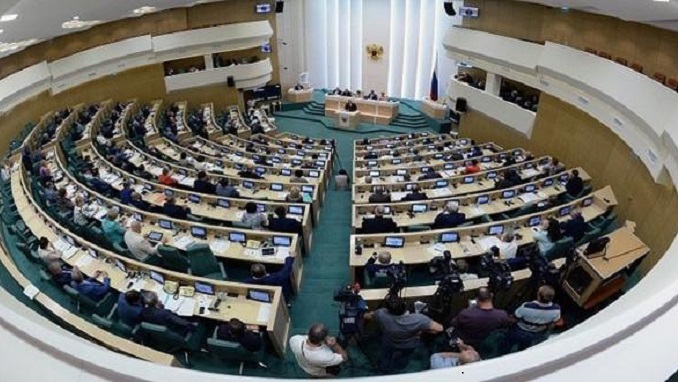 The Federation Council, Russia’s upper house of parliament, enacted a measure on Wednesday that places a temporary prohibition on leaders and members of groups designated as extremist or terrorist in Russia, as well as persons associated with such groups, from being elected.

At the Federation Council meeting, 146 senators voted in favor of the bill, one senator voted against it, and one abstained from voting, TASS reports.

Following a court judgement on the prohibition or dissolution of their organizations, leaders and founders of extremist or terrorist groups will be barred from standing for electoral office for a period of five years. Staff of such groups, as well as anybody connected to their operations as determined by a court, will face a three-year ban.

The paper establishes criteria for assessing a person’s involvement in the operations of extremist or terrorist organizations. Involvement is defined under the law as the actual implementation of the aims and forms of activities that were used to label an organization as extreme or terrorist.

People who express support for such groups’ aims and forms, as well as their specific acts, will be considered to be affiliated with them. Oral and online support are both acceptable forms of expression. While a court must decide on a person’s involvement in the operations of such groups, no court judgment is required in the case of the founders and leaders of such organizations, as well as their deputies.

Those who voiced support for a group one year before a court judgement declaring it extreme may face a three-year ban from running for office. If they held leadership roles in such groups three years before a matching court judgment, such leaders will face a five-year ban.

The new law does not apply to previous elections.