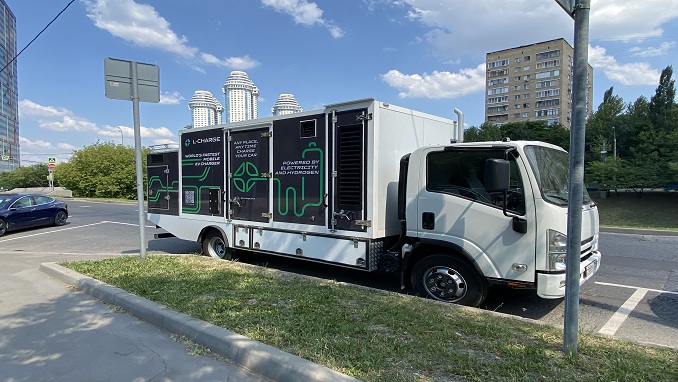 According to the company, it takes just 8 minutes to charge an electric car to a range of 100 km. L-Charge also plans to build 4-5 EV charging units and to launch them as a mobile chargers in Paris, Berlin, New York, Amsterdam and London.

During the presentation in Moscow EV charger manufacturer, the company also presented its new solution, which is a super fast mobile EV charger.

The Russian invention is fundamentally different to other similar devices since it is a mobile mini power station which itself generates energy, stores it and enables other vehicles to recharge without needing to be connected to the grid. The energy is then generated from liquefied natural gas, but the option to switch to hydrogen is already in place.

“Around 90% of atmospheric pollution in Moscow is caused by vehicles, and Moscow is a leader in the development of public transport. To significantly reduce hazardous emissions, private and commercial vehicles must be switched to electricity.” Dmitry Lashin, CEO of L-Charge, said in a statement.

According to Lashing, the natural gas is the cleanest source of renewable energy available today, and in the case of L-Charge’s charger, generation of energy is even 5-7% cleaner than in gas thermal power stations – in other words, it is cleaner than charging a vehicle from the grid or a socket.

“As a result, we can cut the level of pollution from vehicles by at least one third right now.” Lashin stressed.

He alsonoted that given the way electric vehicles are developing today, it is simpler to address the issue of moving the chargers than to create a large number of stationary chargers across the city.

“We could continue developing the network of charging networks connected to the grid, spending a huge amount of resources, both time and money. But the problem of inadequate infrastructure can be resolved straight away by deploying a network of autonomous charging stations.” Lashin added.

The Russian capital has already implemented a set of measures aimed at supporting EV development, making parking for EV’s free of charge, as well as providing free charging at public chargers.

Unemployment in Russia Down to 5.2%