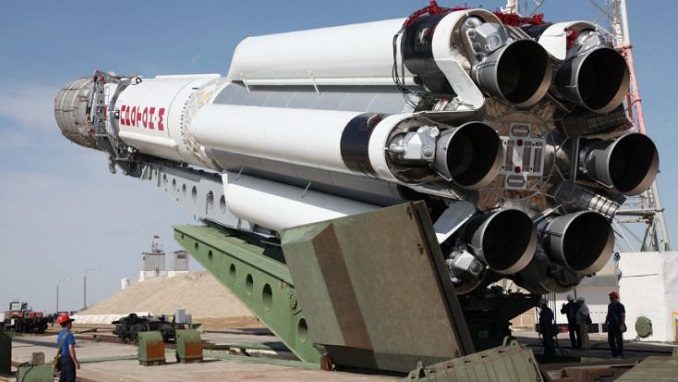 Russia’s Energia Space Rocket Corporation has come back to the idea of sending a manned mission to the Moon with the help of four Angara-A5V rocket launches, a source in the domestic space industry told TASS on Tuesday.

“As part of the research work, the Energia Space Rocket Corporation is now working on the option of sending a manned mission to the Moon with the help of a four-launch flight scheme,” the source said.

This scheme implies separately orbiting a future piloted spaceship, a lunar take-off and landing module and two oxygen-hydrogen boosters with the help of Angara-A5V launch vehicles, the source said.

A manned spacecraft will dock with an orbital station in a low near-Earth orbit, he said. “There the crew will wait for the orbiting of an oxygen-hydrogen booster, following which the booster’s docking will be carried out in orbit,” the source added.

Simultaneously, a lunar take-off and landing module and another oxygen-hydrogen booster will dock in the low near-Earth orbit. After that, the boosters will give an impulse to the spacecraft and the module for a flight to the elliptical orbit, following which they will separate, he specified.

“After their transfer to a 200 km low lunar orbit, the spacecraft and the lunar take-off and landing module are expected to dock,” the source added.

A source in the domestic space industry told TASS in 2015 that up to six launches of the Angara-A5V heavy carrier rocket from the Plesetsk and Vostochny spaceports would be required to make a manned flight of Russian cosmonauts to the Moon.

There were plans at that time to orbit a lunar take-off and landing module first, then a booster with efficient cryogenic propellant components, thirdly a manned spacecraft and fourthly another booster. Another paired launch was expected to deliver the lunar base’s first expedition module.

Later, the dispatch of human missions to the Moon was envisaged with the help of two launches of a super-heavy carrier rocket. Russia’s State Space Corporation Roscosmos Head Dmitry Rogozin noted at the end of 2020 that the availability of two launch pads for the Angara carrier rocket (at the Vostochny and Plesetsk spaceports) from 2023 would make it possible to combine launches, assembling crewed spaceships in orbit. This would serve as the basic instrument for the start of lunar explorations, he said.

Russia plans to send the first human expedition to the Moon’s surface by 2030.