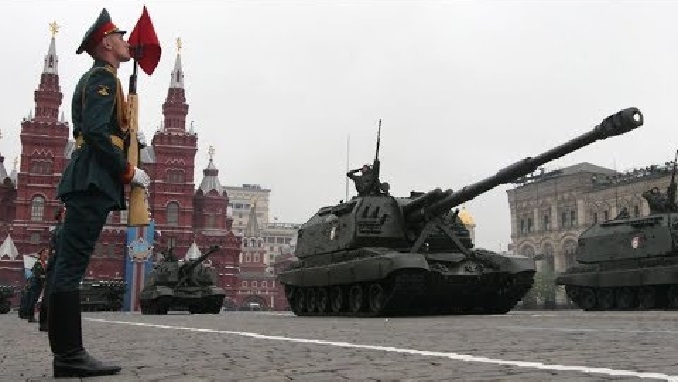 Some of the newest and most advanced military hardware possessed by Russia including a hypersonic missile and a robo-tank was showcased on Wednesday at the traditional Victory Day Parade commemorating the defeat of Nazi Germany, Business Insider reported.

Thousands of servicemen and women took part in the annual display of military might, parading among columns of tanks, missiles and drones as military jets fly over. The parade has traditionally been used by Russia to showcase its latest military technology.

This year, the new hardware on display included the Uran-9 unmanned tank, dubbed robo-tank. It is manually controlled by a single operator from a mobile command and control station two miles away.

The tank was already deployed in Syria, according to a Facebook post by the Ministry of Defence. It is equipped with anti-tank guided missile launchers, an automatic cannon for defence against ground and low-flying aerial targets, and machine guns.

Other hardware on show included the Uran-6 — a mine-clearing robot used in Palmyra, in Syria, two years ago – as well as two unmanned aerial vehicles, the Korsar and Katran drones.

Pilots flew in a familiar diamond formation in several models of fighter jet, including the fifth-generation Sukhoi Su-57. In March the TASS news agency reported that two such stealth fighters had been successfully tested in Syria.

Russia to Develop Soyuz-5 Rockets in 2021