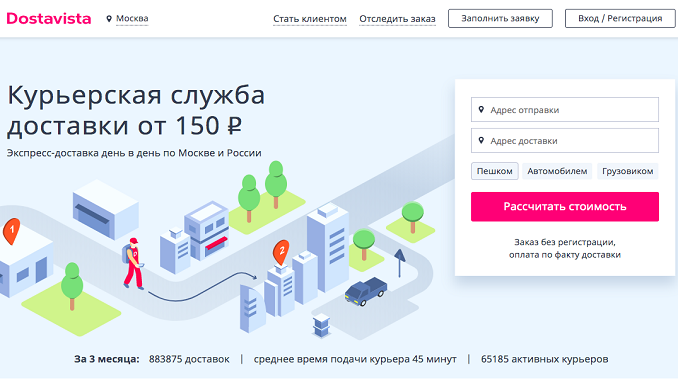 Dostavista promises same-day delivery powered by its network of “trusted couriers”. The startup was founded in 2012 by Mike Alexandrovski, after he initially considered creating a game where players would be asked to deliver virtual items before pivoting to the real thing. Via the Dostavista mobile app, a gig economy-styled courier can be booked to pick up and deliver the requested item in a claimed “less than 90 minutes”.

The company currently operates in 11 countries, including Brazil, India, Indonesia, Korea, Malaysia, Mexico, the Philippines, Russia, Thailand, Turkey, and Vietnam. It employs almost 400 people and says it is on track to hit a $100 million GMV run rate.

Perhaps most noteworthy in the highly competitive and usually cash intensive market of delivery, Dostavista says it is already profitable.

“These days it’s possible to order food to your house in a half-hour, taxi in minutes, but unless you’re an Amazon Prime member, your options for affordable, same-day delivery of goods are very limited,” says Alexandrovski in a statement. “That’s a problem and one we intend to solve.”

Meanwhile, the latest injection of capital will be used to invest further in its product, try out new “bold” product experiments, and for more aggressive marketing and sales. This will include strengthening the global team through additional hires.

Putin Assigns Work on Amendments Not Included in Constitution