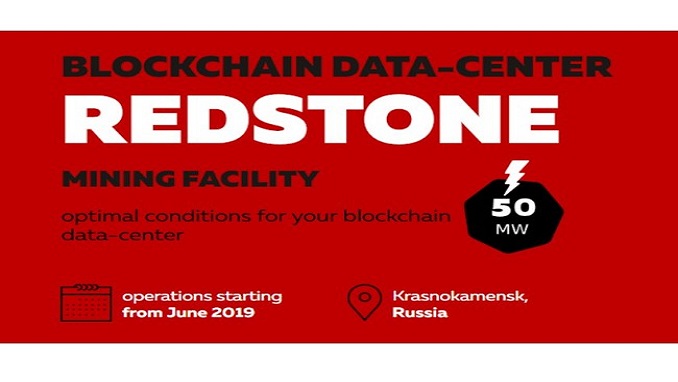 Russian engineering and construction company Telecor is building a new data and mining center in the town of Krasnokamensk near Russia’s borders with China and Mongolia, the company said in a statement.

The facility, called Redstone and is currently under construction, “will become a new home for digital currency miners from China, Russia and around the world,” the company said. According to Telecor, Redstone will offer its clients the benefit of a convenient location, cheap electricity, perfect climate (avg. annual temp is 2°C) and accessible water for cooling.

“The key feature of Redstone is the power-generation capacity of 50MW (under Phase 1) that will be built on its own off-the-grid generator base providing reliable energy source. Redstone is located at the premises of a non-nuclear thermal power plant operated by Rosatom – partner of the project and a State Nuclear Energy Corporation. Telecom network is provided by Rostelecom,” the statement says.

“Redstone’s location provides a good and stable quality of internet connectivity that can handle heavy loads of a data center of such scale. Proximity to the Chinese border and Manchuria’s airport make Redstone an accessible destination for new equipment deliveries from China and minimize overall logistics costs in general,” it adds.

Telecor has been involved in over 500 projects in engineering, automation, IT, and telecommunications including modernization/reconstruction of power grids and thermal power plants.

“Due to low costs and own energy generation at Redstone, which are for sure some of the most important benefits of this site, our company could offer very low prices, probably the lowest, not only in Russia but throughout the world,” says Telecor’s CEO Andrey Chernoknizhnikov.

Initial project financing for the new center comes from Telecor, and active phase of construction will begin this month after the completion of design work, the executive added.