Sheremetyevo International Airport hosted the grand opening of the all-Russian photo exhibition “Russia: Flight Through the Centuries,” dedicated to the Day of National Unity on November 3. The exhibition will travel to 85 regions of Russia.

The opening ceremony was attended by Yuri Pulia, head of the Department of Print Media, Book Publishing and Printing of the Federal Press and Mass Media Agency; Andrey Zhuikov, partner and member of the Board of Directors of the REGION Group of Companies; Olga Sviblova, art critic and director of the Multimedia Art Museum, Moscow; Anna Zakharenkova, Director of Public Relations of JSC SIA; Sergey Bezrukov, actor, film director and People’s Artist of the Russian Federation; and photographer Dmitry Zverev.

The exhibition is intended to acquaint the people with the natural beauty, diverse architecture and richn cultural, historical and spiritual heritage of the republics, territories and regions of the Russian Federation. Citizens of other regions of Russia will see the exhibition in the central plazas of cities, in exhibition halls of museums and libraries, and in airport terminals.

A part of the exhibition is dedicated to the 75th anniversary of the Victory in the Great Patriotic War. It includes photographs of war correspondents accompanied by lines of legendary poems about the war. The collection also includes modern photos that remind new generations of the great feats and heroism of Soviet soldiers. The project was organized by the REGION Group of Companies with the support of the Federal Press and Mass Media Agency and Moscow Credit Bank PJSC.

“We are glad that Sheremetyevo Airport has become a kind of launching pad for the launch of an all-Russian project dedicated to one of the most patriotic holidays,” said Anna Zakharenkova. “The airport is popular, but it is not a typical location for cultural and educational events. Sheremetyevo actively participates in nationwide art events such as The Night of the Arts and The Night of Museums, and it also organizes its own exhibitions and festivals with extensive programs. All this is in line with the most important social mission of Sheremetyevo Airport, to popularize Russian culture among our fellow countrymen and abroad.”

Andrei Zhuikov, in turn, noted, “We were planning this exhibition with the idea of showing people our country in all its greatness, and I hope we succeeded. I would like to thank Sheremetyevo Airport and hope that the photos from our project will allow people to think about traveling again, allow them to feel the spirit of adventurism again, and get great pleasure from traveling across Russia.”

Yuri Pulia said, “This exhibition is the result of the national photo project ‘Russia: Flight Through the Centuries’, reflecting the beauty and diversity of all regions of Russia. The photo albums released within the framework of the project have received wide international recognition. The project actually extends the traditions of famous Russian photographer Proskudin-Gorsky, who was the first to create a large-scale photo chronicle of Russia at the beginning of the 20th century. A whole series of exhibitions that will open on November 4 in all regions of Russia has begun here at Sheremetyevo.”

The photo exhibition ‘Russia. Flight Through the Centuries’ is opened for passengers and airport guests until December 4, 2020 in the pedestrian gallery between Terminals D and Aeroexpress. Sheremetyevo Airport thanks its permanent partner Aeroexpress LLC for help in organizing the event. 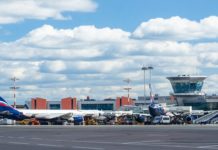 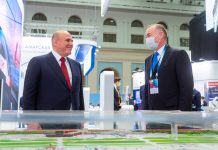