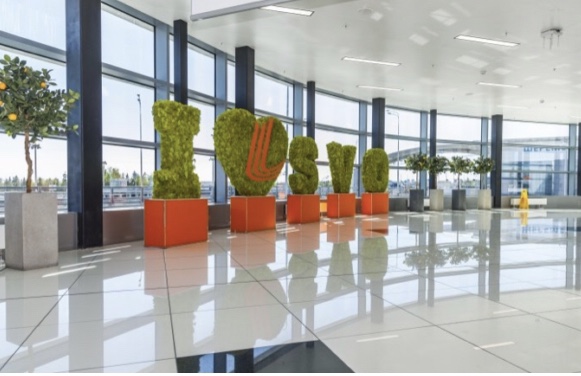 Sheremetyevo International Airport has been awarded the ACI Airport Service Quality Award (ASQ) in the category Best Airport by Size and Region for Over 40 million passengers per year for 2018. The awards ceremony was held in Bali, Indonesia, on 4 September 2019, during the Gala dinner of the second annual ACI (Airport Council International) Customer Experience Global Summit.

Sheremetyevo Airport has been rated one of the best airports in Europe in terms of service quality for six consecutive years. The ASQ Award marks the first time it has been recognized as the top airport in the category of airports serving more than 40 million passengers a year.

ACI World Director General Angela Gittens notes, “The ASQ Awards represent the highest possible customer experience accolade for airport operators around the world. In an increasingly competitive environment, these airports have recognized that delivering stellar customer experience is an important business tool. Tonight, amongst global peers, we celebrate the commitment of airports worldwide to meeting and exceeding the evolving needs of customers under one airport community.”

The 2018 result exceeds the 2017 results by 0.4 points. 53.3% of the passengers participating in the study rated the quality of service at Sheremetyevo Airport as excellent. The passengers who were surveyed gave the highest marks for the atmosphere at the airport, the cleanliness of the terminals and the courtesy of the staff.

Sheremetyevo International Airport is one of the TOP-10 airports hub in Europe, and the largest Russian airport in terms of passenger and freight traffic. At the end of 2018, the airport served 45,836,000 passengers, which is 14.3% higher than in 2017.

At the end of 2018, Sheremetyevo was awarded the best in quality of service for airports in Europe with a passenger flow of more than 40 million passengers a year by the ASQ ACI program. The airport also entered the ACI Director General’s Roll of Excellence, which lists the best airports in the world.

Sheremetyevo is recognized as the best airport in the world according to the global analytical study conducted by British company Stasher.

ACI’s Airport Service Quality (ASQ) provides airports with a 360-degree overview of customer service quality management with a unique set of solutions. ACI helps nearly 400 airports around the world improve their customer service by providing Community members with data based on proven experiences at other airports, market research, management and processing of customer experience.

In a Historic First, Smoke from a Siberian Wildfire Reaches the...