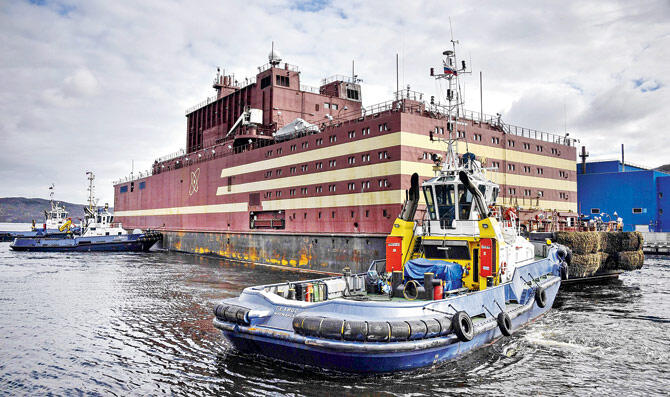 Despite warnings from environmentalists who called Russia’s new floating nuclear power plant “Chernobyl on ice,” the world’s first floating nuclear reactor set sail on Friday on a journey across the Arctic, Reuters reported.

Loaded with nuclear fuel, the Akademik Lomonosov left the Arctic port of Murmansk to begin its 5,000 kilometre (3,000-mile) voyage to Pevek in northeastern Siberia.

Russian state nuclear agency Rosatom says the reactor is a simpler alternative to building a conventional plant in isolated places where ground is frozen all year round, and it intends to sell such reactors abroad.

The new reactor is part of the new floating energy and heat plant, which will be a “key element in the development of the Northern Sea Route” and will help Russia “realize large infrastructural projects” in the region, Rosatom said in a statement. The reactor’s trip is expected to last between four and six weeks, depending on the weather conditions and the amount of ice on the way.

But environmental groups have long warned of the dangers of the project, dubbing it a potential “Chernobyl on ice” and a “nuclear Titanic.” A deadly explosion this month at a military testing site in Russia’s far north caused a radioactive surge, prompting further concerns.

Work began on the 144-metre Akademik Lomonosov in Saint Petersburg in 2006. When it arrives in Pevek, a town of 5,000 in the Siberian region of Chukotka, it will replace a local nuclear plant, which will be decommissioned next year, and a closed coal plant.

It is due to go into operation by the end of year, mainly serving the region’s oil platforms as Russia develops the exploitation of hydrocarbons in the Arctic.