This cooperation agreement may include Indian state-owned firms picking up 49% stake in Vankor cluster oilfields, they said.

Indian firms have been in dialogue with Russia since 2017 for a possible stake in the oilfields that will consolidate their presence in the energy-rich Arctic region.

Mid-way through the negotiations, Russia’s biggest oil company, Rosneft, had offered to club five more fields in the same region to the three that were already on the table, the sources said.

Rosneft, Russia’s national oil company that owns the fields, wants to retain a majority stake and is keen to sell only up to 49.9% stake.

Modi will be the chief guest at this year’s Eastern Economic Forum in Vladivostok between September 4 and 6 and would also meet the Russian President for their annual summit.

A host of agreements is expected to be signed during the visit and one of them could be on cooperation in oil and gas, sources with direct knowledge of the matter said. 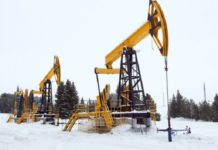 The International Monetary Fund said Thursday it has reached an agreement with authorities in Ukraine to allocate $5 billion to help the country cope with the...

Russian corporations VEB.RF, Rostec, and Rosatom have partnered to construct at least 25 waste-to-energy plants that will process sorted municipal solid waste to power...

At least 12.5 percent of Moscow residents have developed antibodies to Covid-19, the city authorities have said, after taking samples from 50,000 people. It’s...

The year 2020 was supposed to be one of celebration for the Association of European Businesses (AEB), as the main lobbying organization for foreign...

Next U.S. Sanctions on Russia Probably Coming in December: Analysts