“On August 25 at 7:20PM (2:20 PM Moscow time), the first fuel assembly was loaded into the active zone of the reactor,” Rosatom said in a statement, adding that it plans to load 163 fuel assemblies into the reactor.

Tianwan is the biggest joint nuclear power project between Russia and China. In June, Rosatom signed contracts to build four plants in the country, but did not provide an estimate of its investment.

The stage of nuclear fuel-loading signifies the start of the power unit’s launch into operation. As the next stage, the unit will be connected to China’s power grid, Rosatom explained. Tianwan nuclear power plant was built in 2006 by Russia’s nuclear power equipment and service export monopoly owned by Gazprom.

Two of Tianwan’s units with a capacity of 1,000 MW each were opened in 2007. The second stage of the NPP (the third and the fourth power units) is being built with the assistance of Rosatom’s engineering division ASE.

Russia and China are reportedly negotiating the possibility of adding seventh and eighth units. Last year, Beijing and Moscow said they intended further strategic partnerships in the peaceful use of nuclear energy. 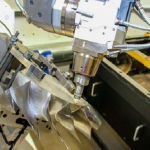 As per the statement from Mikhail Turundev, the director-general of Rosatom Additive Technologies, the evolution of metal powders obtainable on the global 3D printing...