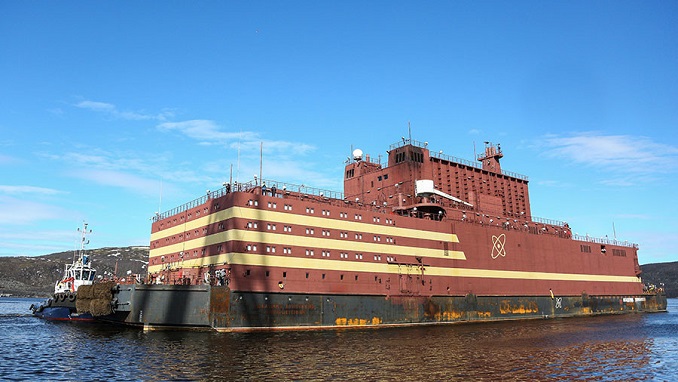 The first ever fuel loading of Akademik Lomonosov, the world’s only floating nuclear power unit (FNPU) so far, has beguns in Russia’s port of Murmansk, The Barents Observer reports.

After getting necessary permission from regulatory body Rostechnadzor, the Akademik Lomonosov will be based at Pevek in the Chukotka peninsula and will gradually replace the Bilibino NPP and the Chaunskaya CHPP to become main electricity supplier of the region, the report says.

“Specialists have begun to implement one of the most important tasks – the stage-by-stage loading of nuclear fuel into reactor of unit-1 and to be followed by the same for unit-2. By the end of this year, we are planning the next important stages like the physical launch of the reactors and the beginning of complex mooring tests,” said Vitaly Trutnev, an official for a Rosatom subsidiary operating the project. He added that the floating nuclear power plant will be thoroughly tested before towing to the north Siberian port of Pevek.

“The Atomflot base has all the necessary infrastructure, specialists and competencies both for loading of nuclear fuel and for physical launch of reactors,” said Dmitry Alekseenko, another official at the company.

Andrey Zolotkov, a local representative of the Bellona Foundation, an environmental group working with nuclear safety issues, says the reactors on board “Akademik Lomonosov” are similar in design to the reactors powering the nuclear powered icebreakers.

According to him, such loadings of nuclear fuel rods to the icebreakers have been carried out a dozen times at the same Atomflot service base without any problems.

“Do not forget that the floating nuclear power plant has attracted a lot of attention so any potentially nuclear dangerous work will be carried out with increased control,” Zolotkov told the Barents Observer.

AnimeFreak The Misfit of Demon King Academy: History’s Strongest Demon King Reincarnates and Goes to School with His Descendants (Dub)